The SixThreeZero EVRYjourney 500 watt fat tire is unique compared to the usual brands of ebike we review here on Ebike Escape for a couple of reasons.

Unlike many of the companies we feature here, SixThreeZero mostly specializes in regular bikes, and they have an interesting variety of street and beach cruiser-style bikes. Their catalog is dotted by beach cruisers, nimble British-style commuters, and even tricycles.

And that’s part of what makes the SixThreeZero EVRYjourney unique — their fat tire bicycle doesn’t look like many other fat bike on the market. It’s like they took the style of a beach cruiser/commuter and made it into a fat tire ebike. The result is a seven-speed fat tire hybrid bike that looks and feels great to ride but falls short in a couple of areas for an ebike priced at $2,400.

The first thing that sticks out on the SixThreeZero is the frame. This is a very large bike, towering over other ebikes in a garage. With a commuter style thin aluminum tubing the whole bike weighs only 62 pounds, light for such a substantial bike. It looks that way partially because of a wide set of steel handlebars shaped like those found on a beach cruiser. This makes for an upright and comfortable riding position.

The fork is steel and the bike comes with both front and rear fenders. Also of note: SixThreeZero includes a fit calculator. Simply input your height and weight and click the button and it will tell you whether it will fit. Using this calculator the EVRYjourney shows that the height range is from 5′ 0″ to 6′ 4″. We had numerous taller folks hop on the EVRYjourney and they felt plenty comfortable.

The Drivetrain and Components

The bike is driven by a 500 watt rear hub motor. That’s driven by a 48V, 10.4Ah (499 watt-hours) battery built into the back of the bike above the rear wheel. For most people, the 500-watt motor will be plenty of power for cruising. Still, the 500-watt motor is smaller than you’ll find on other fat tire ebikes especially in the $2,000 range. In the back, you’ll find a 7-speed Shimano Tourney derailleur. And changing those gears is a twist grip shifter called Shimano RevoShift.

The SixThreeZero website is light on other details and doesn’t include the brand of many of its components, including the 26×4″ tires, cable-driven mechanical disc brakes, battery, or motor. This is an area where the company could improve since many shoppers like to know exactly what they are getting.

On the component side, our biggest surprise on this $2,400 ebike was the unbranded disc brakes. They were finicky to adjust and it would have been nice if the company used Tektro Aries mechanical disc brakes (or upgraded to hydraulic) found on many ebikes around this price range.

The manufacturer says SixThreeZero EVRYjourney has a 25-40 mile range. Remember that this is a 10.4 Ah battery which is on the smaller side of battery sizes these days. Most often you’ll find ebikes with 14 Ah batteries or larger. It is nice to have the battery tucked nicely into the rear rack which adds to the great aesthetics of this bike.

The SixThreeZero EVRYjourney has a left-hand thumb-operated throttle in case you need an extra boost and features a monochrome LCD display with speed, battery gauge, and power meter. The thumb throttle on the EVRYjourney is a standout compared to other thumb throttles on the market today. It is both easier to press and we found that our thumbs didn’t get as fatigued over long periods of throttling.

The SixThreeZero is something of an odd entry into the world of fat ebikes. I could see a taller larger person liking the fit of this bike, since everything seems exaggerated in size compared to most ebikes. Spec-wise, there are ebikes that are less expensive that offer better specs in the fat tire ebike genre. The Aventon Aventure, Rad Power Bikes RadRover, or the Himiway Escape all come to mind. Though none of those models have the swept-back handlebars which certainly is a selling point of the SixThreeZero ebikes.

But, if you’re in the market for a fat ebike that also kind of resembles a beach cruiser, this might be your model. We think the EVRYjourney Fat Tire is nice, just maybe not $2,400 nice. And if the fat tire part isn’t important, they have some really great-looking cruiser-style ebikes too with prices that seem to fall better in line with the rest of the ebike market. Check out all of the SixThreeZero electric bikes. 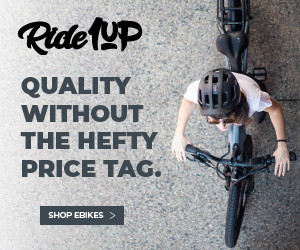